Many of the world’s wetlands are highly degraded and they are one of the most threatened types of ecosystems. To attempt to halt or reverse this trend, there are lots of small and large restoration projects underway in many places. One of the most widely-used restoration methods is to re-introduce flooding to degraded wetlands, with the idea that if you provide water, the plants that were there before will return. Unfortunately, we haven’t had much success predicting the outcome of these restoration efforts and we do not always understand why restoration succeeds or fails.

Wetland plants, which are the focus for restoration, have similar traits (plant characteristics) around the world. We conceptualise plant communities assembling by species passing through a set of filters that select for specific traits. Different traits allow plants to get to suitable sites (dispersal filtering; e.g. seed size, dispersal method), survive environmental conditions there (abiotic filtering; e.g. roots that can tolerate flooding) and survive alongside other plants in the community (biotic filtering; e.g. leaf size, plant height). Imagining it another way, the final plant community is like those few bakers that make it to the last rounds of the Great British Bake Off. To get there, these contestants are first selected from a mass of applicants (dispersal filter), they then undergo interviews and screen tests while baking to see if they can cope with the pressures of filming (abiotic filter) and finally, compete against each other to make it to those last rounds (biotic filter). If we can understand how these filters are affecting plant traits in restoring wetlands (or the selection of bakers) we may be able to predict and manage restoration more effectively (or figure out who will make the final rounds of Bake Off!). Trying to figure out which filter is doing what in a plant community, however, can be difficult as several filters are acting at once and the same trait might allow a plant to pass different filters.

In our paper, we were interested to find which plant traits were changing along flooding and land use gradients and what this means for restoration success or failure in the Macquarie Marshes, Australia. More specifically, we used different types of plant surveys to figure out whether plants were being limited by dispersal or abiotic and biotic filters. Species abundance in the soil propagule bank represented a subset of the species that have passed the dispersal filter (so, for example, all Bake Off applications from England, rather than the whole U.K. – not everyone, but it captures a big chunk). While species presence and abundance in the standing vegetation was seen as having passed all three levels of filtering (the final contestants). As far as we are aware, this is the first time traits of the propagule bank and standing vegetation have been analysed together to disentangle community filters in wetlands undergoing restoration. 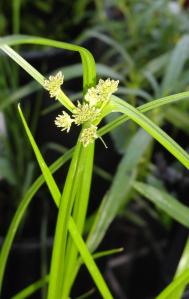 We used fourth corner modelling to combine i) species’ abundance in soil propagule banks, standing vegetation occupancy or abundance, ii) species traits, and iii) flooding and land use history, to identify traits most related to species’ responses. Each of the datasets in i) was used in a model and then by comparing the differences in trait response, we were able to gain insights into how flooding and land use history affects community assembly.

Our trait-based analysis helped disentangle effects of dispersal and abiotic filters. Success for species that use hydrochory (water-borne dispersal; typical of wetland specialist plants) in standing vegetation was negatively related to duration of cultivation. However, in the seed bank, hydrochorus species were not negatively related to duration of cultivation. This suggests that the disturbance associated with previous land use does not limit plants’ dispersal ability (i.e. seeds can get to these fields), but abiotic filters mean that these species are unable to establish in the environment and don’t end up taking their place in the standing vegetation.

We also found that higher flooding frequency was associated with increased native species and hydrochorus species across all datasets. This implies that flooding is acting as a dispersal and abiotic filter that selects for native wetland species. In contrast, species with higher specific leaf area (thin and large leaves, early colonising plants) and exotic species were favoured by increased duration of cultivation and native species decreased with increasing length of cultivation. Continuing with our Bake Off metaphor, these findings are like figuring out that even if you aren’t so great at baking everything (maybe your pies aren’t up to scratch) but you do have a great TV personality, you may still might make the final week.

We speculate that hydrochorus and native species are filtered out in fields with high land use duration due to either (or both):

… land use changing the environment (e.g. soil conditions) in some way that reduces the chance of hydrochorus species surviving
or
… the slightly higher elevation of fields with long duration of cultivation changes flooding conditions (length, depth, etc; as opposed to our measured flooding frequency) which may be important for native and hydrochorus species

So, while it may not seem particularly new to say ‘wet wetlands restore better’, it is imperative for understanding and managing restoration to be know why this is so. Critically, our results suggest that increased flooding may be able to counteract abiotic filtering imposed by the long-term impacts of agricultural production practices.  These results are likely to be similar for other wetland restoration projects around the world given the processes and types of plant traits are common among global wetlands.