What does it really mean to be a woman working in applied ecology?

Thursday 8th March is International Women’s Day and Sunday 11th February 2018 was International Day of Women and Girls in Science. To celebrate this, some of our editors have shared  anecdotes highlighting their own challenges and triumphs, providing a snapshot of what it really means to be a woman in applied ecology. Select a quote to read more and share your own experiences in the comments section. 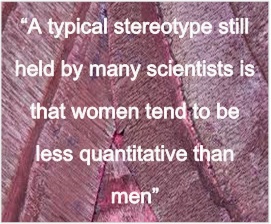 “One of the trickiest things about being a mum and an applied ecologist is the amount of time you are expected to be away from home – whether it be fieldwork, teaching field courses, gaining international collaborations, or attending conferences. I made the decision to reduce my travel and time away from the kids – but certainly feel my research career (via fewer international collaborations) suffered in those early days as a result”. – Anonymous

“A typical stereotype still held by many scientists is that women tend to be less quantitative than men. This assumption has shaped a number of situations experienced during my career, most of them resulting in me feeling frustrated and undervalued. I had people assuming that I was incapable of performing certain analyses; I had people openly doubting my statistical and remote sensing skills. When I get invited to workshops that focus on my expertise, I am generally the sole female scientist who isn’t one of the participant’s PhD student or post-doc. At one of these workshops, I was actually assumed to be some sort of admin staff by several participants – given that the other women there were PAs to two of the participants. Most of the researchers that have actively expressed an interest in collaborating with me are women; most of the collaboration I have had with men have somehow been initiated by me. Most days, I tend to ignore all of this and focus on the positive interactions; some days, these just bring me right back to a place where I feel inadequately equipped to meaningfully contribute to scientific endeavours. Sadly, I have heard that assumptions like this can also plague the daily routine of women doing fieldwork – with some scientists still assuming that women are less able to endure the realities of working in remote and inaccessible locations than men. So to me, one big battle for women in applied ecology is having to deal with heightened impostor syndrome, which is continuously reinforced by assumptions such as these two” – Nathalie Pettorelli (Research Fellow & Senior Editor for Journal of Applied Ecology)

Have you had similar experiences in your field? Share your anecdotes with us in the comments below.

Take a look at part 1 and even more anecdotes from our own women in applied ecology.