The important role of small carnivores (mesopredators) is being increasingly recognised in a variety of ecosystems, with negative impacts on biodiversity often being reported where mesopredator numbers are left unchecked. This generally occurs (and is studied) in systems where there have been changes in the numbers of big, apex predators. 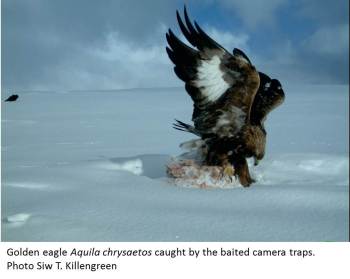 A new study by John-Andre Henden and colleagues from Norway published recently in Journal of Applied Ecology looks at the responses of mesopredators to changes in bottom-up (food related) processes, as well as top-down (predator limitation) factors. This necessitated investigating the mesopredator community rather than individual species because individual species have different bottom-up and top-down constraints and/or functions in the food web. The authors did this using a quasi-experimental design involving the annual migration pattern of semi-domestic reindeer between the boreal forests in winter and the coastal tundra to calve in summer. This led to spatio-temporal variation in reindeer density, and as such was expected to limit carnivore migration because carnivore density tends to be related to low season prey biomass.

Henden and colleagues found that carnivore occupancy rates increased when the density of resident reindeers increased. This illustrates how partial migrations can induce strong bottom-up boosts to mesopredator communities. This response was very similar between species (irrespective of their ecological niche), but there was also evidence that the increased predator numbers actually moved in from neighbouring ecosystems (forest or marine areas). 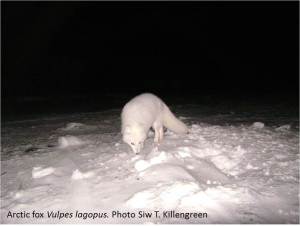 These findings have implications for other human-impacted systems where the impacts of disrupted migrations will be accentuated and wide-ranging. Increased reindeer residency leads to numerical responses in carnivores that could lead to negative feedbacks to herbivores. Minimising reindeer residency should yield positive benefits to herders, small game, the threatened Arctic fox, and ground-nesting birds. 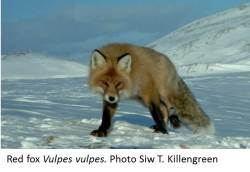 So much research into the responses of mesopredators to trophic alterations has relied upon unvalidated indices, however the strength of this paper is that detectability is explicitly taken into account via occupancy models. These are ideally suited to camera trap surveys (as were used in this study). The degree of spatial (coastal peninsulas of Norway’s Finnmark County) and annual replication (3 years) also reinforces the robust nature of the results.