From local-scale management to global scale policy, conservation decisions are influenced by the knowledge of where species are distributed. Maps of the geographic range of species (or simply ‘range maps’) are typically used to determine the overlap between threatened species and protected areas, and to find new places in need of protection.

The Red List of the International Union for Conservation of Nature is  the most comprehensive source of species range maps globally, often used for analyses of protected area coverage and planning. At the same time, it is widely recognised that IUCN range maps suffer from commission errors, where species are supposed to be present in locations where they are actually absent, and omission errors, which is the opposite case.

Commission errors are particularly worrisome in conservation applications for two reasons: first, they can lead to a false perception of species protection, hence to an overestimation of the actual protection level; second, they can drive conservation investment toward areas of little conservation value, where species are not present. 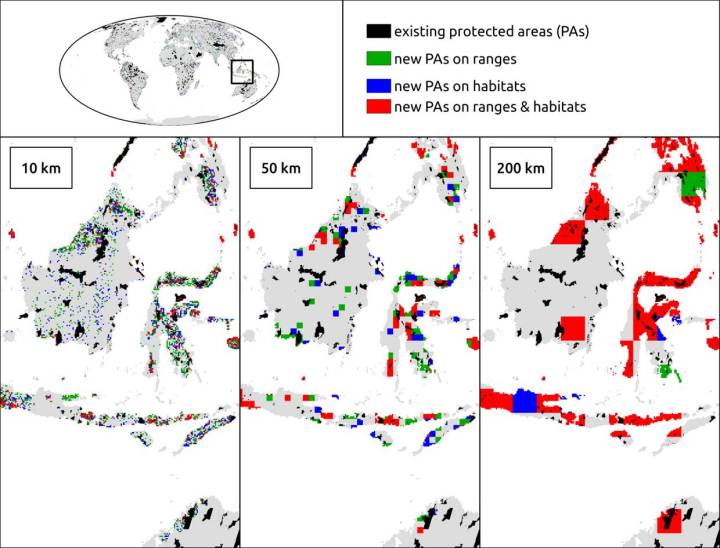 The effect of commission errors can be reduced by removing from a range map those habitats which are considered unsuitable for the species, using habitat models. However, habitat models are data demanding and their use is not always possible, especially for analyses focused on many species. Therefore the adoption of a coarse analytical resolution has been suggested as a valuable alternative. In this case, species’ distributions are represented using coarse grids (100-200 km), thus minimising the probability of including unoccupied grid cells.

However, aside from reducing the effect of commission errors, the adoption of a coarse resolution also affects the efficiency of a conservation plan, i.e. the ability to select a minimal additional area to be protected for achieving an adequate representation of all species. We demonstrated these contrasting effects by performing a set of protected area planning analyses for the world’s threatened terrestrial mammals at various resolutions. We compared species range maps with habitat models to show the difference between protected species ranges and protected habitats.

When employing a resolution of 10 km, a global protected area expansion of 3 million km2 (an area almost the size of India) would suffice to achieve adequate protection for all the 1,115 species in our analyses, if looking at their IUCN ranges. However, a shortfall of 28 species emerges if looking at the protected suitable habitat within those ranges. At a resolution of 200 km, the shortfall for an equal figure of protected area expansion would be just 7 species. At this coarse resolution it was also twice as likely (80% vs 40% at a 10 km resolution) that the priority grids for the protection of species ranges were also considered a priority for protecting species suitable habitats. However the adoption of a 200 km resolution lead to the selection of a total of 12 million km2 of protected area in order to achieve adequate coverage for all species, which is four times larger than the area selected under a 10 km resolution.

In conclusion, our findings demonstrate that adopting coarse resolutions in protected area planning results in unsustainable increases in costs, with limited reduction in the effect of commission errors in IUCN range maps. We recommend that, if some level of uncertainty is acceptable to managers, using range maps at resolutions of 20–30 km is the best compromise for reducing the effect of commission errors while maintaining cost-efficiency in protected area planning analyses.