Ahead of this year’s British Ecological Society Annual Meeting, where you have a chance to meet our Senior Editors, we thought it would be good to get to know the people behind the decision letters. First up is our Executive Editor, and Toronto Maple Leafs fan, Marc Cadotte.

What can you tell us about the first paper you published? 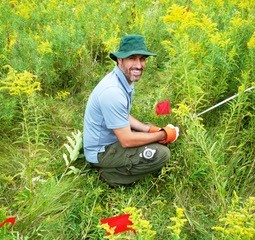 It was from my undergraduate fourth-year thesis project. It was probably the longest fourth-year project; I worked on it for more than two years. It was a comparison of the life-history differences between rare and common plant species of the flora of Ontario, Canada.

What’s your favourite species and why?

Pycnanthemum virginiamum, a plant in the mint family. I affectionately call it ‘bee-crack’, need I say more?

Who inspired you most as a student?

My undergraduate and masters supervisor, Jon Lovett-Doust. He taught me how to channel the love of nature into the pursuit of knowledge.

If you could wake up tomorrow with a new skill, what would it be?

I would love to be able to scuba dive.

Are you a good cook? What’s your signature dish?

I like to think so. Either curries or crepes.

Please share a [funny] story about a paper you had rejected.

I had a thee sentence review where the reviewer claimed to have already thought up the methods being proposed in the paper. I looked up the reference and a sentence in the discussion could be construed to suggest the method was possible.

What’s your favourite sports team and why?

I’m a Torontonian. Maple Leafs, or I would be expelled from the city.

If you could recommend one place for people to travel to on holiday, where would it be and why?

What was the first album you owned?

If any fictional character could join your lab, who would it be and why?

Yoda. Give me one reason why not.

How many British Ecological Society Annual Meetings have you attended? Which one was the best?

I’d have to estimate, maybe 7. Ghent was fantastic.

Are you attending #BES2018? If so, when is the best opportunity for people to meet you?

Lunch and late afternoons (usually at the BES stand). Or Tweet me: @urban_sci. [Marc will also be speaking as part of the Community Ecology (Diversity and Function) session on Mon. 17 Dec, 15:30, Hall 8b).

Professor Marc Cadotte was trained as a community ecologist, first as an MSc student under Jonathan Lovett-Doust at the University of Windsor in Canada, examining the effects of forest fragmentation on forest structure in Madagascar coastal rain forests, then as a PhD student with Jim Drake at the University of Tennessee, combining ecological theory with experiments. He was postdoctoral research fellow at the National Centre for Ecological Analysis and Synthesis in Santa Barbara, California, USA, where he examined the role of evolutionary relationships among species in influencing the health and functioning of ecosystems. He currently holds the endowed TD Professor of Urban Forest Conservation and Biology chair and is the acting Vice Principal of Research at the University of Toronto-Scarborough. He researches the links between biodiversity and ecosystem function, how to predict and control invasive species, and how environmental changes influences the delivery of ecosystem services. He has published more than 120 articles and has pioneered biodiversity measures that quantify species differences. Along with Jonathan Davies, Prof. Cadotte is the author of the recently published book: Phylogenies in Ecology, published by Princeton University Press. Prof. Cadotte was listed on Web of Science’s top 1% most cited scientists in environmental science.

Meet more of our Editors here: