Understanding the role of different species in the transmission of multi-host pathogens is vital for effective control strategies. In their latest research, Lushasi and colleagues present data from a previously unstudied area of south-east Tanzania following the introduction of large-scale dog vaccination.

Rabies is one of the world’s most feared diseases due to its high case fatality rate. Despite the existence of safe and effective vaccines, rabies continues to kill an estimated 59,000 people annually in low- and middle-income countries (LMICs), and sadly children are overrepresented. This has led to a call for action, the ‘Zero by 30’ goal, to end human deaths from dog-mediated rabies by 2030.

Most human rabies results from bites by rabid animals. Once exposed, immediate treatment is vital as rabies is invariably fatal once clinical signs develop. Treatment consists of a course of vaccinations known as post-exposure prophylaxis (PEP). Although highly effective, there are multiple barriers to people accessing PEP including costs, limited availability, and low awareness of rabies risks.

Instead of relying on PEP alone, an alternative and ultimately more sustainable strategy involves preventing disease in the animal reservoir – the animal population(s) responsible for maintaining circulation of the virus and transmitting it to humans. Rabies can infect any mammal, but some species are more likely to contract and transmit the disease. If we understand which species are essential for maintaining rabies circulation (the maintenance hosts), they can be targeted for control.

Across Africa and Asia, domestic dogs are considered the maintenance hosts for rabies and over 99% of human rabies deaths are caused by dog bites. Vaccination of domestic dogs against rabies has repeatedly been shown to be successful and cost-effective in preventing human rabies. Despite this, in many rabies-endemic countries dog vaccination is still not routine. This is primarily due to lack of investment in dog vaccination, but concerns are often expressed that wildlife may play a role in maintaining transmission and dog vaccination may therefore be ineffective.

A previous study in Tanzania showed that domestic dogs are the only species essential to the maintenance of rabies, even in the biodiverse Serengeti ecosystem. The goal of our study was to investigate the transmission dynamics of rabies in a previously unstudied area of Tanzania where jackals were found to make up more than 40% of reported animal rabies cases. 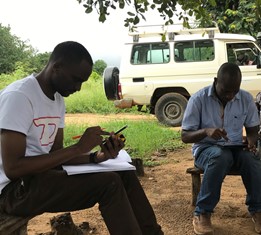 We collected data over a nine-year period from 13 districts in southern Tanzania. We used hospital records to identify people potentially exposed to rabies who we then traced and interviewed to determine if the biting animal was rabid. During contact tracing, additional bite victims and owners of rabid animals were identified and further traced, so as well as collecting valuable data, we also advised people of the risks of rabies and the importance of PEP.

Our study ran in parallel to dog vaccination campaigns undertaken as a demonstration project on the feasibility of dog vaccination in rural African settings. In this context, we examined the evidence on whether rabies transmission is sustained in wildlife as well as in domestic dogs and whether wildlife could present an obstacle to rabies elimination.

We found that rabies incidence in both humans and animals decreased during the period of dog vaccinations, from a high of 218 cases in 2011 to a low of just 15 in 2017, when elimination felt tantalizingly close! In fact, clusters of transmission among all species declined.

Most human rabies exposures (56%) were from domestic dogs, but we estimated that approximately one third of transmission events occurred in wildlife, with the remainder due to cross-species transmission from dogs to wildlife or vice versa. After mass dog vaccination ceased in early 2017 rabies cases began to increase in some districts. We hypothesize that the increasing cases in domestic dogs in 2018/19 resulted from waning herd immunity, coincident with the end of widespread dog vaccination.

Our study provides insights into the complex epidemiology of rabies in multi-host communities and highlights the potential importance of wildlife as a public health threat but also a potential obstacle to elimination. However, even in areas with a relatively high proportion of wildlife cases, domestic dog vaccination still reduced the risk to humans.

Our findings confirm that focusing on domestic dog vaccination will have major public health benefits and, if vaccination efforts are sustained and coordinated, it has potential to eliminate rabies from circulating in this area despite the presence of wildlife transmission.

Read the full article Reservoir dynamics of rabies in south-east Tanzania and the roles of cross-species transmission and domestic dog vaccination in Journal of Applied Ecology.