In this post Associate Editor Ayesha Tulloch discusses a paper she recently handled by Tyler L. Lewis, Joel A. Schmutz, Courtney L. Amundson, and Mark S. Lindberg,  ‘Waterfowl populations are resilient to immediate and lagged impacts of wildfires in the boreal forest‘

Across much of the fire-dependent ecosystems of the globe, fire at appropriate intervals and intensities is critical for stimulating growth and reproduction. However, many ecosystems are now burning at unprecedented rates. Thousands of people were recently evacuated from yet another boreal forest fire in Canada that burned 10,000 hectares in a matter of days and resulted in >80,000 hectares burnt – fires at these scales are now an annual occurrence in this region.

Increasing prevalence of fires has led to an increasing body of research into the responses of plants and animals – responses that might be used to inform fire management policy. Burning at too-frequent or too-rare intervals, or at intensities too high and extents too large to leave refugia for wildlife, can have detrimental consequences. The negative effects of “unnatural” fire regimes have been demonstrated across ecosystems and continents, from temperate and Mediterranean woodlands in southern Australia, to a large number of tropical ecosystems, to the boreal forest of northern America, across a wide variety of taxa.

In the boreal forest of the United States and Canada, the current fire management policy is one of limited suppression, due mostly to the enormous extent and limited accessibility of this ecosystem. In their recent paper, Lewis et al. provide the first quantitative assessment of how fire and associated fire policies of limited suppression over the last 6 decades, have influenced the region’s waterfowl.

Lewis et al. analyse an impressive dataset comprising annual monitoring of waterfowl abundance across the western boreal forest of North America since 1955 by the Waterfowl Breeding Population and Habitat Survey (BPOP). The BPOP is widely considered the most extensive wildlife survey in the world – long-term datasets are critical for understanding long-term effects of disturbance such as fire. Despite numerous fires occurring during the 60 years of monitoring, Lewis et al. found no detectable impacts of forest fires on the abundance of two waterfowl groups, dabblers and divers in the boreal forest. This is compelling evidence that the current policy of limited suppression has had little population-level effects on waterfowl in these forests. The conclusion is simple: natural or silvicultural fires are not in conflict with duck management.

With forest fire rates likely to increase under climate change in many regions including the boreal forest, it is crucial that we establish the biodiversity groups most likely to be affected by change in fire processes versus other environmental and threatening processes such as habitat loss or drought. So why do fires that produce such large changes to boreal forest landscapes, and that have demonstrated negative outcomes for both humans and many fauna (e.g. caribou, many birds) have no detectable impact on waterfowl abundance? Lewis et al.’s models show that waterfowl in boreal forests are regulated by environmental variation and limited by geographical variation, rather than fire. Does that mean we don’t have to worry about managing waterfowl in the boreal forest? Absolutely not. Lewis et al show that the boreal forest waterbodies appear to act as refugia for waterfowl when drought dries prairie ponds – this phenomenon is likely to become a more common occurrence with climate change and reduced rainfall in the prairie.

What does this mean for the future of boreal forest management under a climate of changing temperatures, rainfall and fire frequency? Firstly, it draws attention to the fact that managing fire alone is likely to have little effect on populations of waterfowl in this ecosystem. Fire management is clearly important for maintaining many populations of animals and plants in the boreal forest, and ecologically-based policies based on the needs of these species are crucial and largely still lacking both in the boreal forest and in most other fire-dependent ecosystems across the globe. For waterfowl such as dabblers and divers, however, alternative management actions and policies must be canvassed for maintaining populations into the future. 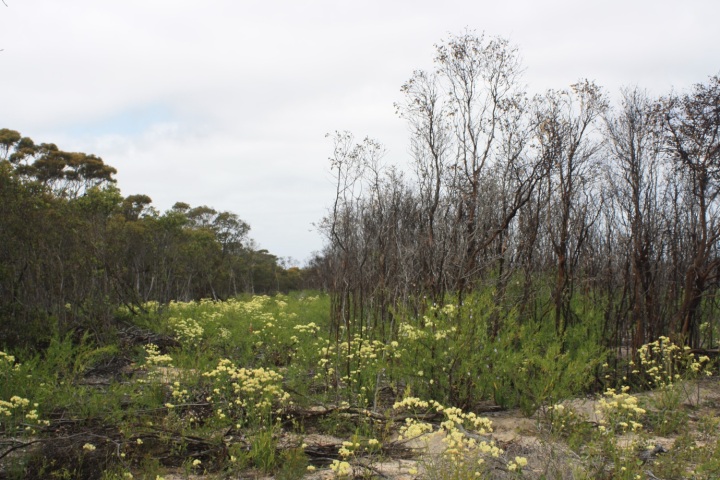