Does reliable tidal energy come at an environmental cost?

Renewable energy is rapidly gaining momentum in an effort to cut carbon emissions and reduce the effects of climate change.  Although wind and solar are now well-established industries, many countries are looking to the sea as a source of energy.  In particular, focus is turning to ways to harness the power of the tides to generate electricity.  Although not yet widely used, tidal energy is proving highly attractive for future electricity generation because, compared to wind and solar, tides are almost entirely predictable in terms of their location, timing and power.  Extracting energy from the tide will typically be carried out in coastal waters with strong tidal currents using turbines that resemble undersea wind turbines.  These are generally mounted on the seabed and have large blades that can rotate at speeds over 40 km/h.

There is also increasing evidence to suggest that marine mammals such as seals, whales, and dolphins are attracted to tidally energetic areas for foraging.  This has led to concerns about the environmental impacts of tidal turbines.  In particular, there are currently major concerns that marine mammals could collide with rotating turbine blades resulting in injury or death. 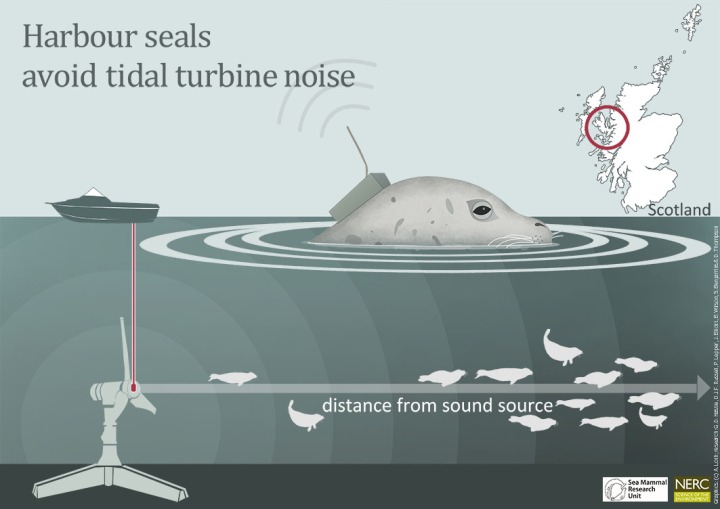 Despite this, there is currently a lack of data to determine whether this concern is warranted.  This data gap leaves regulators and policy makers trying to predict the impacts of tidal developments in the absence of robust data.  This can lead to highly precautionary licensing decisions being made which is currently proving to be a major barrier to the commercial development of the tidal energy industry.

There is a clear paradox here; we need operational turbines installed in areas used by marine mammals to fully understand the impacts, yet a lack of data on how marine mammals respond to turbines is currently causing tidal developments to be delayed or cancelled.

To help overcome this, we designed a study to investigate the behaviour of seals in the presence of a simulated tidal turbine.  We took recordings of the sounds of an operating tidal turbine and played them through an underwater speaker in a narrow coastal channel with strong tidal currents.  This is an area of interest to the tidal energy industry and is used by large numbers of seals for foraging during the summer months. To measure the behaviour of seals in response to the sounds, we tagged 10 harbour seals with GPS tags to measure their movements while at sea.  These tags record the location each time the seal is at the surface and transmit the data to base stations on shore where the data can be downloaded each day.

We found that the seals continued to use the channel throughout the study and the turbine sounds did not affect the overall numbers of seals in the channel. Importantly however, there was a localised impact of the sounds; the use of an area by seals up to 500 metres surrounding the speaker decreased by up to 41%.

Why is avoidance important?

Our findings suggest that seals can hear the underwater sounds of operating tidal turbines and a proportion of them will move away to avoid it.  In terms of risks to seals this seems like a positive result; by avoiding the sounds of turbines, seals should reduce their likelihood of colliding with blades on real turbines.  However, avoidance may have costs that need to be considered as well; these include displacement from important foraging areas or barriers to movement.

This result is also critical information for regulators and policy makers looking to assess the impacts of tidal turbines and advise on the development of the tidal energy industry; in practice, the empirical measures of avoidance can be used to predict the likelihood of collisions with future tidal turbines.  There is now a clear need to measure responses by animals to actual operating tidal turbines to learn whether they can co-exist safely with tidal turbines at the scales currently envisaged for the industry.

More broadly, this study reminds us that with the acceleration of marine renewable energy developments over the coming decades, it is going to become increasingly important to try and reconcile the long term benefits of renewable energy (through reduced climate change) with their potential negative impacts on wildlife.