This post was written by Alienor Chauvenet (alienor.chauvenet@ioz.ac.uk, @AChauvenet) on her paper “Saving the hihi under climate change: a case for assisted colonization“, which was selected as Editor’s Choice and was a highly commended entry for the Journal of Applied Ecology‘s Southwood Prize 2013.

I can imagine that your first reaction might be “what’s a hihi?!”. The hihi –or stitchbird- is an endemic passerine bird species of the North Island, New Zealand. It’s not as famous as the kakapo or the kiwi but it’s just as threatened and interesting.

In fact, it almost disappeared decades ago as the European colonisation of New Zealand introduced invasive mammalian predators who love to chomp on cavity nesting birds like the hihi, and cleared away native forest in which they are normally found. By cheer luck, the species managed to stick it out on one single island, called Little Barrier Island (LBI) or Hauturu. Today, they survive in six populations including the one on LBI and are a conservation success story.

At the root of this success, a recovery strategy overseen by the New Zealand Department of Conservation, which includes translocations combined with supplemental feeding, providing nesting boxes and predator control. A big investment into a pretty special species! It is the only representative of a whole family, the Notiomystidae, and the only bird species known to perform face-to-face copulation. Did I mention that it’s very pretty too?

So far, all hihi translocations have been within what we believe used to be their range before it contracted. This is called performing reintroductions and is thought to be one of the safest forms of translocations because, if the species used to be native there, the likelihood of it having a negative impact on the ecosystem after translocation is much lower than in a naïve ecosystem. That means that the hihi has only ever been translocated to areas on or around North Island.

Despite the fact that the hihi recovery strategy has been largely successful so far, things may be changing. Despite taking good care of the species, there is a new threat in the way of climate change, which is altering climatic conditions throughout New Zealand. This has two consequences; first areas that are currently suitable for the species may lose some or all of their suitability and second new areas that were previously unsuitable might become perfect for the species. In other words, we might need to rethink the way we plan translocations for the species.

This is where I come in. As part of my PhD, and in collaboration with researchers from the Institute of Zoology (ZSL, UK) and Massey University (NZ), I predicted the impact of climate change on the long-term viability of hihi populations, and identified where habitat will remain suitable, become suitable, and become unsuitable for the species throughout New Zealand. In short, gathering as much information as possible to help us prepare for the future by making smarter decisions. 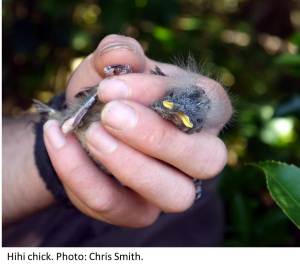 In brief, what we found was that hihi population dynamics is very sensitive to temperature. A small rise in average seasonal temperature can negatively impact their survival and reproduction. That’s not good news for some of the current populations, including the one on LBI, because they are on the northern edge of the hihi range, where temperature is expected to rise under climate change.

There is good news, however. Areas on the South Island of New Zealand, where there are large swaths of relatively intact native vegetation, are predicted to become suitable within a few decades. The only problem is that South Island is not part of the native range of the hihi, which means that to move it there is to do assisted colonisation, a form of introduction. While species introductions aren’t always bad, there are many examples where intentional or non-intentional introductions have had catastrophic consequences for native species and ecosystems.

In theory, the hihi is a great candidate for assisted colonisation. Because of climate change, the benefits of introducing the species to the South Island outweigh the costs of doing so. Indeed, within a few decades this might be the only way to continue the recovery of this unique species, despite large investments in supplemental feeding or nest provision. Moreover, the risk of the hihi becoming invasive and impacting host ecosystems is very low as it cannot hope to survive outside of predator free areas and we know it is unable to outcompete common nectar feeders.

Our work suggests that assisted colonisation may be in the cards for this rare endemic species. Hopefully, it will also serve as evidence that climate change needs to be taken into account when planning translocations for species recovery. Translocations represent large investments in terms of money and effort, but also ethically, because we take animals’ survival in our own hands, almost literally. It is thus important to plan them in a way that maximises their chance of success, and that includes thinking about climate change.