In this post, Rachel Blakey discusses her paper in the latest issue of Journal of Applied Ecology ‘Bat communities respond positively to large-scale thinning of forest regrowth‘

The world’s forests are changing. Most of the remaining forests are re-growing after being cleared, but do these regrowth forests resemble the original primary forests? Often, where large tracts of forests were cleared at once (e.g. clear-felling), they do not. Primary (or “old growth”) forest usually contains trees of variable ages with a variable structure whereas regrowth forest often has a dense uniform structure where trees have all grown at the same time. Dense stands of young trees all compete for the same resources, slowing their growth rate and leading to what foresters call “stand lock”.  This is bad for forestry, but also for biodiversity.  Mature forests provide resources that dense regrowth can’t. In Australia, tree hollows are a critical resource for a large number of endemic bats, birds and arboreal mammals. These habitat features can take centuries to form and are virtually non-existent in regrowth forests unless forest management particularly caters for their retention. For many threatened species, a century is too long to wait for habitat to return naturally and conservation managers are looking for ways to speed the transition from regrowth to mature forest.

“Early thinning” is the practice of cutting down a proportion of young trees within regrowth to allow faster growth. This technique, long used by forestry, is gaining traction as a method to speed up regeneration of forests and formation of habitat features (e.g. hollows) important for biodiversity. This has been met with healthy scepticism from conservation advocates, especially where it has been proposed in national parks, where thinning has been dubbed “logging by stealth”. However, long-term scientific research has provided evidence that thinning can improve the conservation value of forests. For example, one Australian study showed that after 42 years thinned stands produced around 20 hollow-bearing trees per hectare, whilst unthinned stands produced none. While these long-term benefits have been established, what are the shorter term effects of thinning and are they positive or negative for biodiversity?

To answer this question, we investigated a group of animals that are incredibly sensitive to forest structure: insectivorous bats. Insectivorous bats use echolocation to navigate their surroundings and capture prey – they are constantly calling in short, regular pulses of ultrasound so they effectively “see” using sound. In a cluttered forest, bats are trying to discern the echoes from a potential prey item (an insect) from countless twigs, leaves and shrubs whilst manoeuvring around obstacles – it can be challenging. For these reasons, we expected bat activity (a measurement of bat calls we use to indicate habitat use) to increase in thinned compared to regrowth stands. 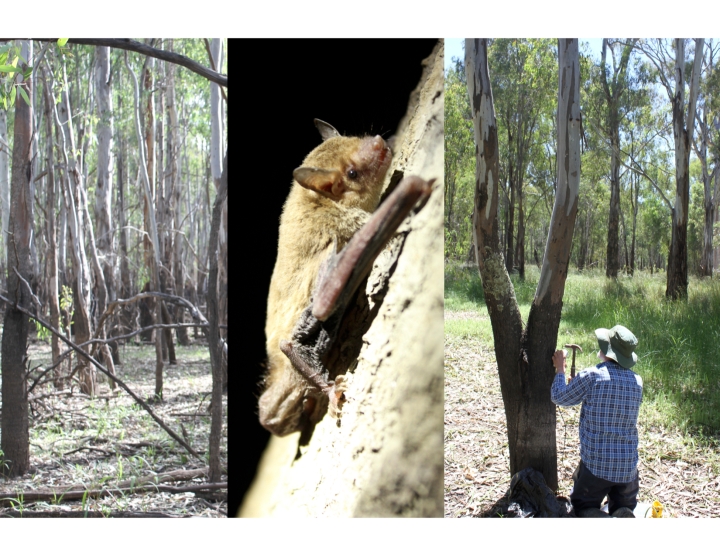 We studied bats in a floodplain forest in south-eastern Australia where more than a century of logging and river regulation have changed the structure of forests and large stands of dense regrowth exist. It turned out that total bat activity was 60% lower in unthinned regrowth compared to thinned sites despite higher insect biomass at the regrowth sites. Additionally, bat activity in thinned stands was similar to activity in our reference sites (mature open forest). This suggests that it was forest structure and not prey availability or time since thinning that was driving bat habitat use. Synthesising our findings on the international literature on bats and thinning, we found support for a “clutter threshold” of around 1100 trees per hectare; bat activity started to decline once trees exceeded this density. Most studies report bat species with traits adapted to open areas (e.g. long thin wings for fast flying and low-frequency echolocation calls for detection of prey at long distances) receive the most benefit from thinning. However, our study showed that even bats with clutter-tolerant traits had lowest activity (up to 22 times) in regrowth compared to other forest types.

So what does this mean for management – to thin or not to thin? Like most ecological questions, the answer is complex. While the bat community in our study appear to gain foraging opportunities from thinning, at least one threatened bat species is known to prefer dense regrowth to roost in during the day. If we look to other taxa, open forest structures can increase densities of large aggressive birds thereby excluding smaller, threatened woodland birds. So retention of some regrowth patches may be important for forest biodiversity. Finally, any benefits of thinning (short or long-term) will be wasted if thinning operations remove trees that already contain limiting habitat (e.g. hollows).

So what is the solution? If we are serious about biodiversity conservation, all thinning operations must be conducted in a strategic adaptive management framework and special care must be taken to avoid damage to hollow bearing trees.  This means identifying clear objectives and targets, trialling multiple management actions (e.g. thinning, fire and environmental water management) and intensities (e.g. thinning to different tree densities and patchy vs. uniform thinning) and learning from the outcomes.

2 thoughts on “Forest thinning: a bat’s friend or foe?”