Cormorants are very efficient predators of fish in shallow waters. They are particularly good at exploiting artificially high densities of fish. Predictably, this has led to widespread conflicts with human fisheries interests. Although fishermen in East Asia have exploited the fishing skills of semi-domesticated cormorants for centuries, persecution was a more widespread reaction until fairly recently. In continental Europe, cormorant breeding populations were reduced to a very low level around 1970, but following protective legislation they increased very rapidly in the subsequent decades. This led to renewed widespread conflicts, not least in wintering areas where fish farmers, anglers and commercial fishermen all complain about the competition from and damage caused by cormorants. 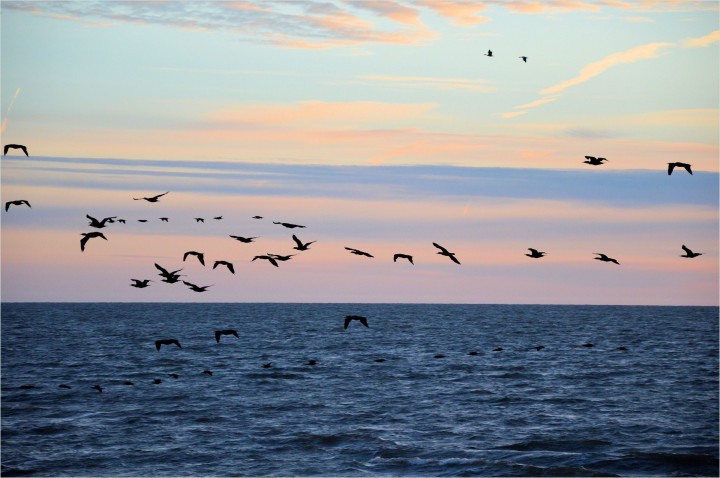 Although the breeding and wintering areas of cormorants in Europe overlap, the largest wintering populations occur in areas with few breeding birds. The common reaction has therefore been to see cormorant predation of fish as a problem imposed on fishing communities by ‘foreign’ nature protection interests, and demands for management in countries with large breeding populations have been widespread. Managers and stakeholders in cormorant wintering areas therefore have a strong interest in knowing the breeding origin of local wintering birds, and a wish to identify counterparts in breeding areas to negotiate management of specific populations.

Cormorants have been ringed in very large numbers throughout Europe for decades, and many ringed birds have been found in the wintering areas. Results from these studies have shown a general tendency to migrate to the south and southwest, but also that birds originating from the same breeding area and even the same breeding colony may occur almost anywhere in Europe and North Africa in winter. Nevertheless, no overall analysis of the winter distribution of the various breeding populations, and thus the composition of the various wintering populations, has been undertaken before now. This is due to considerable technical challenges, because the probability of finding a dead ringed cormorant varies between wintering areas, and the numbers ringed varies between breeding areas. Both factors also vary strongly over time. In this study, funded mainly by the European Commission, we used a newly developed statistical model that takes these complications into account. Based on more than 30 years of ringing and ring recovery data, combined with information on the size and productivity of breeding populations, we estimate the size and composition of wintering populations.

Cormorants are opportunistic in their migration behaviour, as in many other aspects of their life cycle. When new opportunities become available as e.g. winters get milder or fish farms are established, cormorants are quick to exploit them. On the other hand, when cormorant numbers increase in specific areas, birds can react and move elsewhere, including to less profitable feeding areas not previously exploited. The distribution of both individuals and populations is thus highly dynamic and liable to change, also in the coming decades.

Under such conditions, management of cormorant-related conflicts is difficult. Our results imply that it is impossible to solve problems in specific wintering areas by management actions in specific breeding areas. Solutions should preferentially be sought at the local scale where conflicts occur, and where cormorants can be excluded or discouraged from exploiting specific fisheries by various means. The alternative approach, range-wide management of cormorant population size through interventions in both breeding and wintering areas, would not be consistent with the current EU Birds Directive, and there would be no guarantee that local conflicts would be markedly reduced.

This study is an example of how combining data on larger geographical and temporal scales enables completely new insights. Only through the dedicated efforts of many ringers and ringing centres in Europe through several decades has it been possible to describe the changes that have occurred in winter population composition, and to assess their implications for management.

Read the full article, Where do wintering cormorants come from? Long-term changes in the geographical origin of a migratory bird on a continental scale in Journal of Applied Ecology.

One thought on “Where do wintering cormorants in Europe come from – and does it matter?”